Raising bilingual children, it seems quite a hot topic as more and more people move around the world, sometimes across the world. Yes, there are a whole lot of books and theories (all of which I have avoided) to give your children the best start with more than one language, but what about how it actually feels to be a bilingual parent to a bilingual child? More importantly, how can you cope as a bilingual parent?

From toddler groups to classes to opinionated taxi drivers, what does it feel like to be the foreign parent in a foreign country speaking a foreign language to your own, speaking to your child in a language that is foreign to those people who you come in contact with day to day?

I will tell you: it can be heartbreaking and it definitely is extremely frustrating. 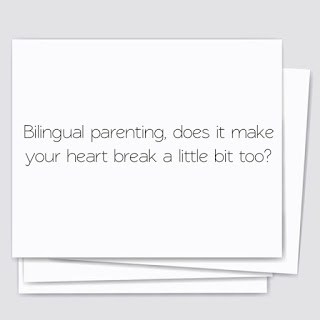 I try my best to speak to my daughter (right now 2 years and almost 4 months old) in Spanish as much as I can, but I am beginning to find it increasingly difficult in social situations, above all where other children are involved. If I am telling her off for something she did, I want the other parents to understand that I am, or if I am telling her to go do something, play with another kid. It’s easier to just tell her in English to avoid social tension.

The thing is that I know from university, don’t forget I am a translator, that so-called bilingual children can start talking later than monolingual children but that they are taking everything in as sponges and that one day it will all fall into place. I also know that in a few years time she may start rejecting my language so not to feel different from her peers and that I will have to stand my ground, however hard. But it is hard already.

Then there is the part that, despite her very first words being Spanish, like agua (water), she is now saying a whole lot of words and sentences in English, much more than Spanish. I also know that a whole lot of this is mainly due to the fact that we are in England and the fact that it is much easier to say shoe than zapato, sock than calcetín. I studied this at university, I knew this over a decade before even having a child. I was fully aware of it, still it hurts when my parents go on about it: ay inglesita que no te entiendo (yes, her Spanish grandma may not understand her, for goodness sake I don’t understand her sometimes, she still is very chatty in her own language that she makes up). The really is no need to rub it in.

Or the taxi driver who insists I must talk English to her because she will be going to school in England and needs to understand English. So the fact that I am a highly cultivated person, my husband is English and she understands both are all to be ignored then?

But the worst part of being a bilingual parent has been trying my best to speak Spanish to her at all times and still have her reply in English every time. It is really demoralising, and in my mind I know ahead of time that one day another kid will mention the fact that her mother speaks differently because I do have a Spanish accent.

I could go on and on about this topic for paragraphs and paragraphs but I shall stop there. I just needed to get it off my chest and let it flow into words. It helps, even if they are words written in my “other” language.

Thank you all for reading.

Update: Guys, please I am not after we do this and that and it works or I know so and so who does this and that and it works for them. As I said at the beginning of the post, this is not about raising bilingual children, this is about how it feels to be a bilingual parent. Not just that but a highly educated translator and linguist who actually knows all about the process as she had to study it (and don’t forget my husband is English and doesn’t speak much Spanish). In my household mine is the minority language. I also know that I will want my child to read, write and understand the Spanish culture, in fact I want her to have the two cultures. I have met plenty of people in my life who can speak both their parents’ languages but who can’t write or read them. There are a million depths to this but this is about me as a parent, not about a solution.