This Instant Pot Meat Loaf is delicious! I love meatloaf and it turns out that so does the little Tapita! It's delicious hot or cold so really convenient. Perfect for picnics for that imminent spring weather that is round the corner.

I have added a lot of flavour and a lot of vegetables to this meatloaf and it has been a hit with the little Tapita so I am sticking to it from now on (as much as I can stick to any recipe anyway!).

As you don't all have an Instant Pot yet, I have given instructions below for other ways of cooking.

Exact amounts in recipe card below. Jump to Recipe

In fact, I was expecting the all-turkey meat loaf to be blander in flavour but it's positively delicious and still full of flavour.

ALL MY PRESSURE COOKER RECIPES

The timings for a pressure cooker meat loaf are in the recipe card below.

Would rather cook it in the oven?

If you don't have an Instant Pot (yet) and you fancy giving this meat loaf a go, place in the oven preheated at around 200ºC covered in foil for a good 30 minutes, then remove the foil and keep cooking for a few minutes until cooked through.

In the air fryer

Start at 180ºC for 25 minutes. Use a meat thermometer to check the centre is cooked through.

But this mix isn't just great for meat loaf, so here are timings for other things you might want to turn it into:

5 minutes with natural pressure release in a steamer basket with 250 ml water in the inner pot (these are the most popular Instant Pot steamer baskets and inserts).

Or use the meatballs instead of sausages in my All-in-One Instant Pot Sausage and Tomato Pasta.

I have old mini loaf moulds from Sainsbury's, they fit side by side in your Instant Pot, handy if you want to freeze some! In this case do 15 minutes on the trivet.

Fry as meatballs or burger patties?

Easy, just turn into meatballs or patties and just shallow fry in a bit of oil until cooked through.

In an Air Fryer. No need to preheat.

If your air fryer has a built-in preheating phase like the Vortex does, start by air frying for 8 minutes at 180ºC.

If your air fryer doesn't have a built-in preheating phase, like the Cosori, start with 10 minutes at 180ºC.

Try to turn the meatballs a couple of times during air frying time.

Just barbecue until cooked through

What pan / mould should I use for this Instant Pot Meat Loaf?

Although you do not need a loaf mould for this, it does help make it very juicy.

You definitely want it for the all-turkey mince version, as it doesn't hold together as well as the pork-beef version

No loaf pan? Not to worry! You could wrap it in foil, do not pack it up too tightly though.

Any loaf pan that fits inside your pressure cooker will do BUT do not forget to leave a minimum of a 2 cm clearance for steam to circulate safely so you want it to be smaller than your inner pot by at least 2 centimetres.

In the photos you can see the Instant Pot Non-Stick Silicone Loaf Mould which has a detachable sturdy tempered glass base, is super easy to use and can go in the dishwasher!

I have to say I had my doubts at first about this type of pan given my clumsiness, the glass, the way the silicone wraps around the glass...

But, to my surprise, I have found it easier to use than conventional metal springform tins.

This recipe helps give your Thermie a workout too, helping you chop all the veg.

You can also mix the meat mix on reverse but it doesn't work all the flavours in as well as a big of hands-on effort (I have tried it both ways now and definitely mixing it all by hand). 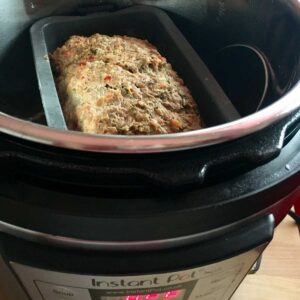 Tip: feel free to turn this recipe into burgers (to fry or steam, around 7-10 minutes), meatballs (if you roll them small they only need 5 minutes in a steamer basket), anything you can think of. If you turn it into meatballs, make sure you make them small and try them in my Sausage Pasta. Or even into meat loaves using the Sainsbury’s mini meat loaf moulds mentioned above (15 minutes for those). All these timings could do with a natural release.

Oven If you don’t have an Instant Pot (yet) and you fancy giving this a go, place in the oven preheated at around 200ºC covered in foil for a good 30 minutes, then remove the foil and keep cooking for a few minutes until cooked through. Meatballs or patties for frying Easy, just turn into meatballs or patties and just shallow fry in a bit of oil until cooked through. BBQ Just barbecue until cooked through.
*Terminology
Quick release (also called quick pressure release or QPR) means venting the steam as soon as the pressure cooking process finishes, i.e. moving the steam release handle from Sealing to Venting.
Natural release (also called natural pressure release or NPR) means letting the float valve pop back down of its own accord, so basically you don’t need to do anything at the end and can keep your feet up. If it takes over 15 minutes, you're ok to release the rest of the steam (by turning the steam release handle to Venting) that may be left in order to unlock and open the lid.
Sometimes you'll see me talk of a combination of NPR followed by a QPR. For example, a recipe can have a 4 minute NPR followed by a QPR. This means that you wait for 4 minutes at the end of the pressure cooking time and then do a QPR by moving the steam release handle from Sealing to Venting.
Tried this recipe?Mention @feistytapas or tag #feistytapas!
Share on Facebook
31