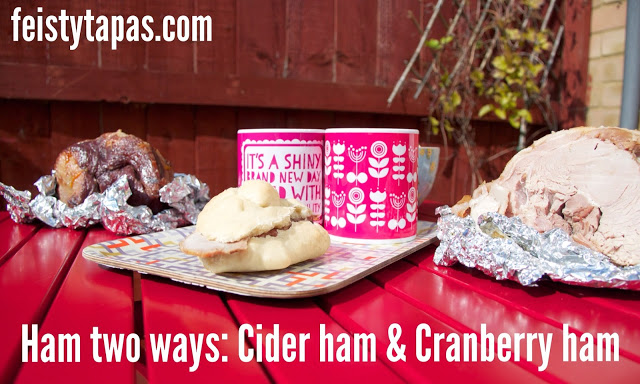 A little while ago Waitrose challenged me (the Spaniard, just in case you had forgotten) to come up with a Great British dish.

So, of course, I asked husband (the Britishman): ham, egg and chips with proper ham!, he decided.

If you give me a piece of gammon I will probably stick it in a huge pan with "grelos" (similar to kale), chorizo and potatoes. I am a Galician Spaniard after all! I am good at research though and I do have the huge advantage of running  a Thermomix Facebook group with over 500 members so, of course, I asked them all to fill me in with all their tips. A few minutes later two ways of cooking ham had caught my (and husband's) eye: Cranberry Ham and Cider Ham.

So, off I went to Waitrose yesterday (full of cold, on a Sunday). I did consider shopping online as per the brief but I actually do all my shopping online, always with a meal plan and I actually love going to Waitrose (we have four large supermarkets in town and Waitrose is the only one I like going to), so I asked if it would be ok to shop in-store and it was. Well, there is the free coffee, the free newspaper and the free Kitchen magazine... and on top of it the staff are always nice AND helpful. These days that is a huge treat for me, the freelancer who works too many hours and now does the school run (oh the school run, more on that soon!). It was actually really quiet and bearable in there too, you know what supermarket shopping can be like on a Sunday.

This time I didn't have the coffee or the magazine or the newspaper though as husband caught me at the checkout when he came to pick me up. The lovely checkout lady was used to loading gift cards but not so much redeeming them. She apologised profusely and then a lady called Jane came along and had it sorted in no time at all. By that time though husband just wanted to go, T was in the car with auntie L, T wanted ice cream. And, well you know what it's like...I didn't have time to ask her if they had any of the Kitchen magazines as I hadn't seen any and she didn't have time to ask me about newspapers. A coffee was, of course, out of the question.

Next time I might as well shop at Waitrose online! You know, if they really really like this post and want to work with me again 😉

Thank you so much to everyone at the Thermomix Owners UK group for the ideas and especially to Aveen and Clare for their cider and cranberry tips! I was amazed at the results and, courtesy of the lovely start to Autumn, I have to say that, after a lovely ham, egg and chips dinner last night, today this gave me the perfect opportunity to sit outside in the sun (which is actually rather warm for this time of September). I suggest a ham sandwich and coffee party when you cook these and, if you do, come back to tell me all about it!

Keep reading for the recipes and visit Waitrose's Great British Garden Party page for brilliant ideas to make the most of the early Autumn sun in your garden is still intact after the summer, if like mine it has unexpectedly been taken apart and it has turned into a mud pit... throw the party at someone else's garden. From Waitrose to décor Waitrose is not ready to let go of this wonderful summer we have had (hooray!). I also may or may not have spotted some gorgeous mugs while in there. 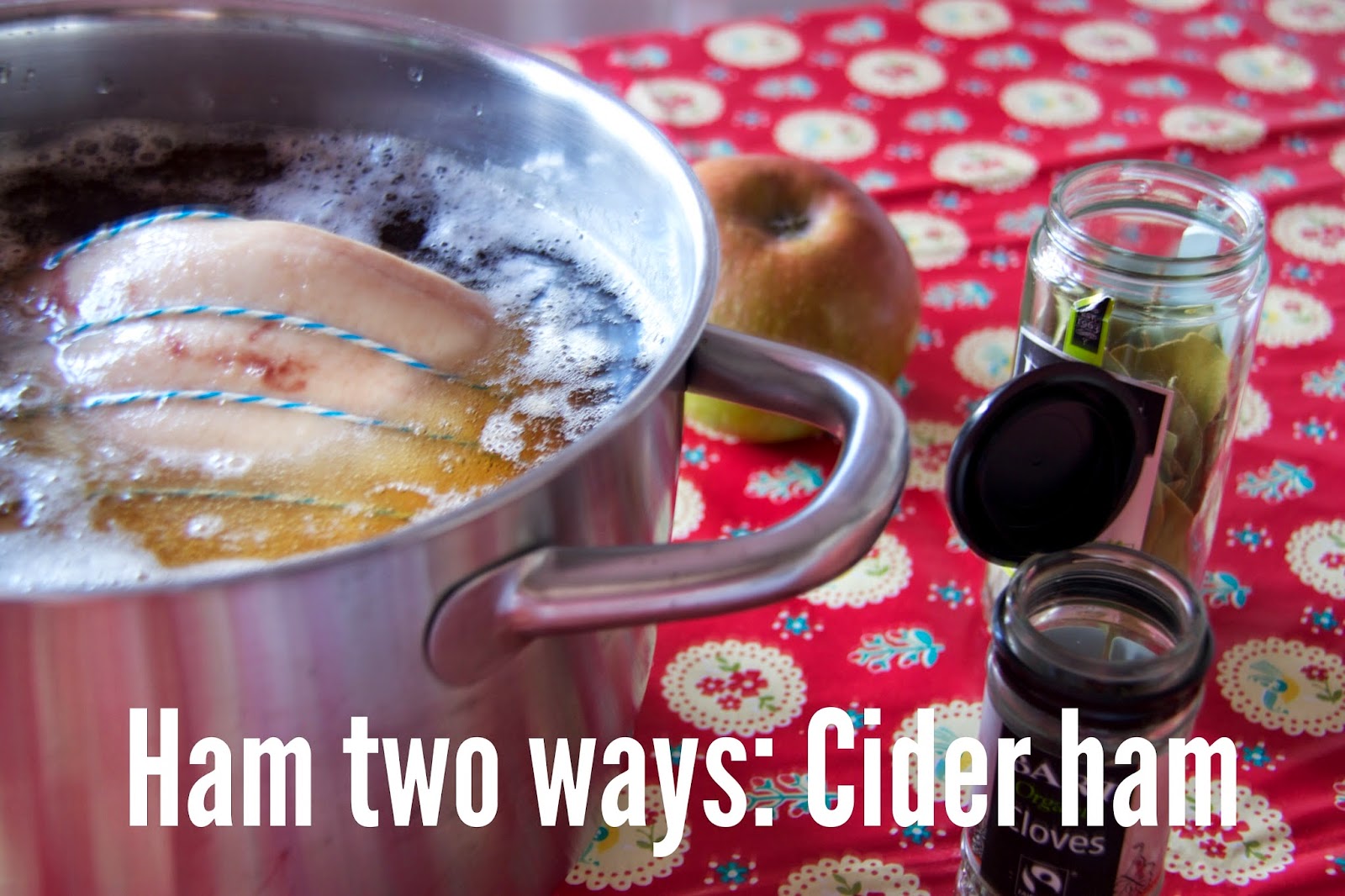 Ingredients for the glaze:
- 2 Bramley apples, cored and quartered, no need to peel
- 75 g water
- 1-2 tablespoon honey (depending how sweet you like it, I went with 2 after adding just one)
- 1 teaspoon cinnamon

Ham:
1. Place the gammon joint (leave the string in) in a large saucepan, cover with the cider, add the bay leaves and cloves.

2. Bring to the boil over a high heat and then reduce the heat and let it simmer (mine simmered for over 2 hours.

3. Take the ham out making sure you place it on a dish that will catch the stock it will release or it will flood your worktop. I placed it in the Varoma with the lid underneath to catch any extra stock. Do NOT throw the stock away, it's gorgeous!

4. Preheat the oven to 200ºC (mine is a fan oven) while the ham stands for 15 minutes and you prepare the glaze as per instructions below or, of course, go for your favourite glaze. Take the string and the rind off (if it has any), leaving the fat, score the fat and coat the ham (all sides) with the glaze, into the oven it goes for approx. 10 minutes. 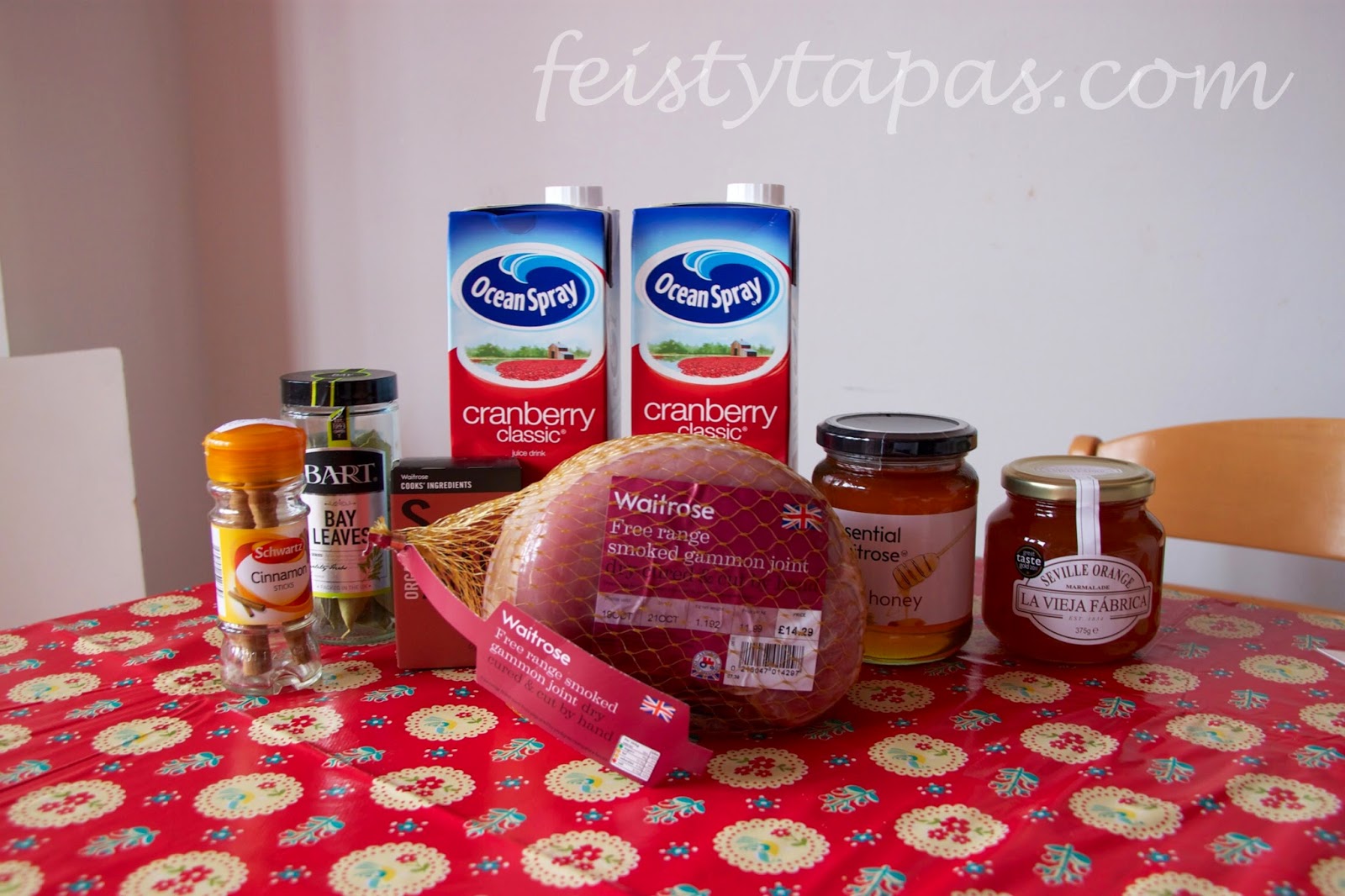 
Ingredients for the glaze:
- Orange marmalade, about half a jar
- Honey, about 2 tablespoon but to taste really. You don't want it too sweet as you want to taste the orange.

Ham:
1. First thing to do is check how salty the ham is by cutting a little bit off and frying it in a dry pan until cooked, taste it, if it's really salty it will need soaking in fresh cold water for about 12 hours, changing the water once (oh the things one learns from watching lacón con grelos being cooked). If it's not too salty you can proceed.

2. {Skip this step if soaking ham as per step 1} My ham wasn't too salty so I placed it (with the string on) in a pan of fresh cold water with nothing else and brought it to the boil, then discarded that water.

3. Then it's time to cover the ham with the cranberry juice (top up with water if necessary), add the 2 star anise, the cinnamon stick, the bay leaf and the orange slices (if using) and bring to the boil, then simmer for about 20 minutes per 500 g. So mine didn't need very long really, probably about 50 minutes.

4. Let the ham stand in a receptacle that catches the stock (do NOT throw away any of the stock), turn the oven on to 200ºC, prepare the glaze below and smother the ham in it (all over, remove the string first), once oven is preheated, stick the ham in for 10 minutes or so. Done!

1. Mix both ingredients (orange marmalade and honey) well and coat the ham all over. If just using cranberry sauce, just smother the ham in it.

Simply send the husband out to the chippy, slice the ham, fry one or two eggs. Done!

We now have a ton of ham and about 5 litres of stock. I am so excited about the stock possibilities, I am thinking risotto and soup to start with! I will freeze some of it and I have bought a lot of strong flour and yeast to make rolls for ham sandwiches and I am planning on freezing ham portions too for future meals. All in all, the initial cost was expensive but the ham will go a long way and so will the stock and, to be honest, it wasn't hard work at all! I will definitely keep cooking ham and playing with various flavours from now on.

Disclosure: I was sent a £60 Waitrose/John Lewis gift card which I put to good use to buy the ingredients so I could experiment. Then I paid about £28 on top of that as I needed sophisticated things such as toilet paper, chopped tomatoes, milk etc. for the house.