A classic of the British festive season is the Christmas Pudding, in this post I share Catherine Phipp's Pressure Cooker Christmas Pudding recipe as well as a video tutorial filmed when Catherine came to film at The Kitchen Gadget Hub.

Please note that this post is long so that you have every single detail you might need in one place as every year there are a lot of questions about how to pressure cook a Christmas Pudding and I don't want to be sending you around in circles.

The blurb before the actual recipe is essential reading and it's laid out that way precisely so that you get all the information you need before you dive in.

The photos will hopefully help but I strongly recommend watching the video too.

You can use any recipe you like for Christmas Pudding, they all steam in the same way - just use the timing guide below for the different sizes of pudding basins.

Mix all ingredients as per the instructions in the recipe card. Use a big mixing bowl.

We used a 6 litre Instant Pot stainless steel inner pot as a mixing bowl and it was the perfect size.

Transfer to pudding basin or basins. We used two medium ones here.

Form a pleat in the greaseproof paper.

Tie with string or a elastic band.

After the natural pressure release, remove the pudding basin carefully (a long handled trivet or a foil sling will be handy for this part).

Once removed from the pressure cooker, let it cool down completely at room temperature.

Store following the instructions below.

Full cooking instructions are in the recipe card below, including how to reheat on Christmas Day.

If you want to make sure that it’s cooked right through to the middle: use a thermometer probe like the Thermapen to make sure it’s at least 98ºC.

It should be still at that temperature after a natural pressure release.

If you leave it on keep warm for a few hours, that temperature will of course drop down.

Either leave in the basin if you don’t need to use it or wrap up sterilised muslin followed by some thicker fabric - eg, tea towel.

Forgot to soak your dried fruit? Catherine has come up with a method to quickly soak dried fruit in a pressure cooker.

It is more effective than soaking large amounts of fruit in the tiny amounts of liquid most recipes call for.

This is the method I usually use for soaking.

If you use this method, your fruit will be immediately plump and glossy.

Tip: This works not only with alcohol, but with other liquids too - I use it to soak fruit in tea for a tea bread.

Or take it out of the pudding basing and wrap it, just make sure it has cooled down fully before you wrap it. And use very clean materials.

The high alcohol content means that, as long as the pudding is stored properly, it can keep for a long time.

Scald the muslin with boiling water. Wring it out. Dry it. Use it.

It seems mould can happen above all when using greaseproof paper and foil or materials that are not very clean, also when the pudding hasn't been stored when totally cool and dry.

You have to ensure the Christmas Pudding is dry before you put it away, then wrap in greaseproof and foil or a sterilised muslin…

Then check it after a few days and rewrap in fresh greaseproof and foil if that's what you used as, of course, fabric is more breathable but no harm rewrapping in sterilised muslin again too!

If you do this your puds will keep for years. Although this paranoid Spaniard reckons eat it before 6 months.

This recipe is enough to fill:

This recipe will also halve easily. Just stick to the timings above for the size of your pudding basin.

You need at least a 6 litre / quart pressure cooker for the largest size.

We used two 1 litre basins for the video.

There are lidded pudding basins that are metallic and plastic pudding basins, I don't really trust the latter as the lids have been known to warp under pressure.

Three things to look at when buying a pudding basin are:

As an Amazon Associate I earn from qualifying purchases, you don’t pay a penny extra though.

My advice is to get a medium basin so that you can pressure cook my Chocolate Pudding!

Although the mini ones are also handy for my Spanish Flan de Huevo. And for my Air Fryer Egg Pots.

Okay, get both medium and mini pudding basins!

Take a long length of foil and fold twice, lengthways, so it is 4 ply.

You will end up with a very sturdy length of foil which you can use to lower your pudding into the pressure cooker.

If using the foil, place the pudding in the centre of it and lift it into the pressure cooker, placing either on a trivet or onto a folded up piece of cloth - it is not necessary for the basin to be suspended above the water

Or you can use a trivet, preferably a sturdy one with long handles

Why pressure cook your Christmas Pudding?

Traditionally, Christmas puddings are boiled on the stovetop for 8 hours, continuously releasing steam into your kitchen and having to keep an eye on the water level.

With a pressure cooker, there’s hardly any evaporation, hardly any steam being released into the kitchen and, with electric pressure cookers, no babysitting involved so you can just leave it to do its thing from beginning to end.

When to pressure cook it

Stir-Up Sunday is, traditionally, the day Christmas Pudding is made!

Do an online search for Stir-Up Sunday to find out the exact date.

Everyone in the family takes turns stirring the pudding and makes a wish.

It gives the pudding a few weeks to mature before Christmas Day.

Cooking it longer means you can reduce the maturing time as you’re getting more flavour in during the cooking process.

How to eat a traditional British Christmas Pudding

Every family has a different way of eating it.

In Catherine’s family, they place a sprig of holly on the top, foil-wrapped so not to put it directly in the pudding as it’s toxic.

And they flame it, which is very important.

Another tip from Nigella Lawson, this time for flaming: use vodka.

Vodka is the spirit that burns best, the longest and creates the bluest flame.

Heat a ladle full of vodka over a flame or in a small saucepan. Pour it over the pudding. Turn down the lights. Sit and watch it burn.

How does YOUR family eat Christmas pudding?

How to serve Christmas Pudding

Tip: How to make brandy butter

Melt together sugar, butter and alcohol. You can add a bit of cream if you want a rich creamy one but Catherine loves the sugar and butter.

You don’t have to use brandy for brandy butter. Catherine Phipps loves using rum.

Calvados is really nice if you’ve used apples in your pudding.

Christmas pudding is quite alcoholic so, if you don’t drink very much, go easy. It’s very rich anyway so you will only need a little bit.

What can you do with left over Christmas pudding?

Fry it! Catherine says that it’s great fried. Or in trifle.

Catherine loves to cut slices of it or crumble it up and heat butter and sugar or maple syrup (or your choice of sweetenerI).

Fry it in a frying pan until it goes crispy round the edges and then eat that with big piles of creme fraiche.

Or with fried sliced apples or apple compote.

Or put it in a warm trifle.

The other Christmas Pudding Trifle layers would be:

All my Pressure Cooker Recipes 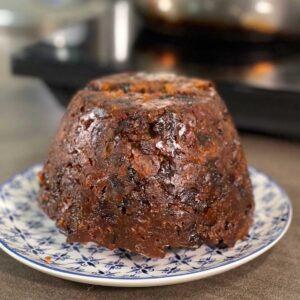 Catherine Phipps
One of the biggest time savers - and water savers too - is making steamed puddings in the pressure cooker. You can use any recipe you like for Christmas Pudding, they all steam in the same way - just use the timing guide below.
5 from 1 vote
Print Recipe Pin Recipe Save Recipe Recipe Saved!
Prevent your screen from going dark
Prep Time 10 mins
Total Time 2 hrs
Course Dessert
Cuisine British

Use a sling or long-handled trivet / steam rack

Who is Catherine Phipps?

Modern Pressure Cooking: The Comprehensive Guide to Stovetop and Electric Cookers, with Over 200 Recipes (launching March 2022)

The Pressure Cooker Cookbook: Over 150 Simple, Essential, Time-Saving Recipes (one of my most recommended pressure cooking books)